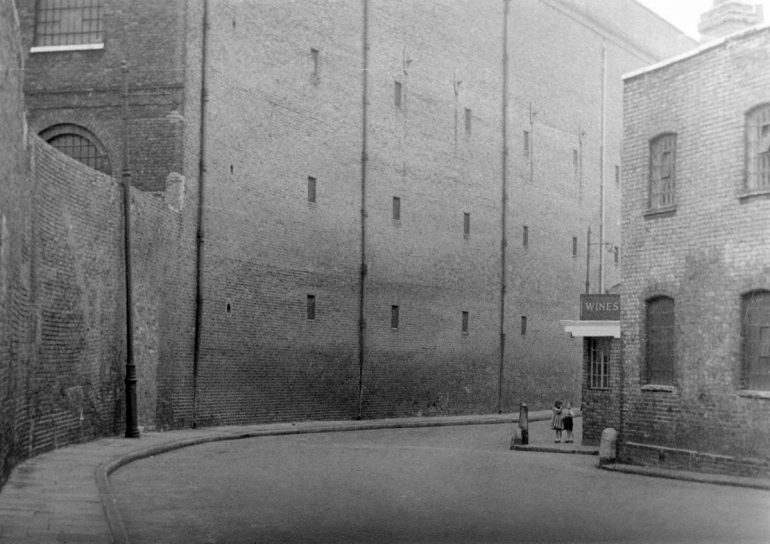 Christopher Matheson and his brother, who still lives in Shadwell, identified this. “It’s St Katherine’s Way, E.I., basically facing east for the street used to wind about a bit.”  – CM.  More about Christopher in a moment.

By holiday Hans Richard means a day of  not working, although Saturday morning work would be usual.  August Bank Holiday had been and gone by the time he arrived in London for his English Language course. It may be an oblique or ironic reference to the Docker’s strike (see further down).   He is perhaps visiting in the afternoon with Herta.    The photo is marked “R” for Rolleiflex, and then in brackets “Rollei/Herta”.  This is the only time in his Scrapbook that he has mentioned that Herta took a photo using the Rolleiflex. (see Chapter 10 for a discussion about the Rolleiflex camera and Herta.)  The rectangular print is a crop from the square negative. 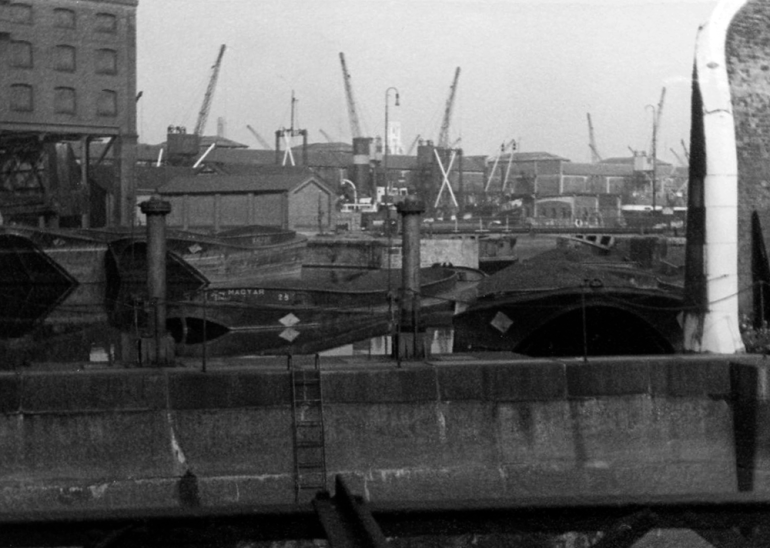 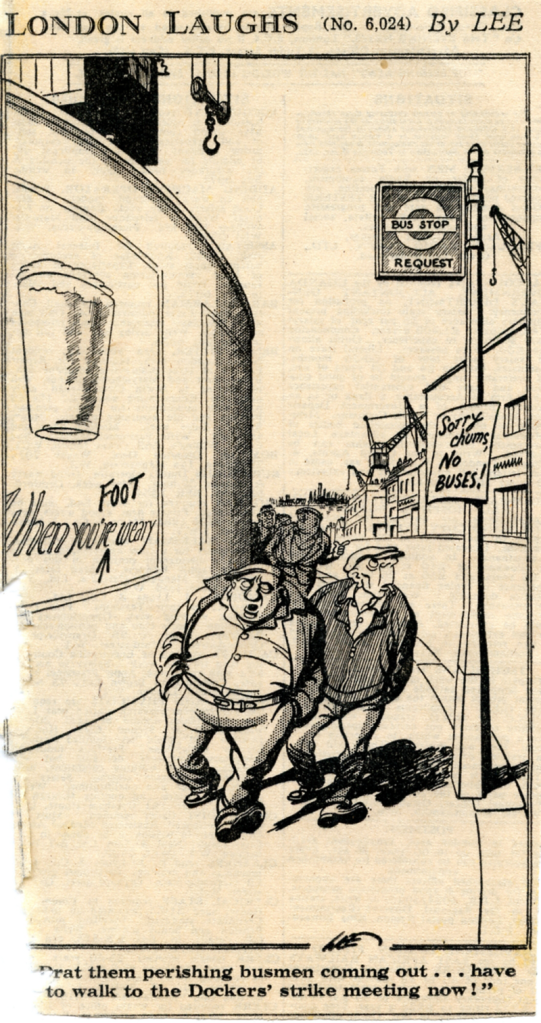 Cartoonist Lee had been drawing  London Laughs for the London Evening News since before 1939.  During the war it had been re-titled Smiling Through.  The background to the cartoon above was that dockers had come out on strike on 7 October, 1954.   On 13 October a strike of London transport workers meant there were no buses running. On 19 October, 1954, the day after Hans Richard Griebe started his return journey to Kiel, London buses were back to normal.  The reverse of the cartoon cutting is reproduced below, as it gives an interesting insight into the jobs being advertised in the early autumn of 1954. Hans Richard titled this next sequence of photos as “Lime House, altestes Dock” – Lime House, oldest docks.  A viewer, Christopher Matheson, who saw some of the photos on the 2013 taster Post London Town ’54 got in touch and kindly pointed out that the photos were in fact taken in adjoining Shadwell.  Thanks to several emails, to and fro, he and a brother of his, who still lives in Shadwell, identified the places where the photos had been taken.  My sincere thanks to Christopher for his contribution.  A reproduction from the 1929 edition of  the A1 Guide and Atlas to London and Suburbs, showing the Shadwell area is below.

Map: 1929 edition of A1 Guide & Atlas to London and Suburbs, published by Geographia. “I am certain this is Limehouse facing south with the bridge being in Narrrow street… The row of houses looks to have been messed about and made into a longer row.”    – CM

“Juniper Street, facing west, from near the corner of Glamis Road.”    –  CM

A girl is about to do a hand-stand in Juniper Street, her skirt tucked in her knickers.  Two boys, one carrying a football are crossing the street, whilst further down a couple cross, the woman carrying her shopping bag.  The girl nearest the camera has a small parcel under her arm. If this was Paris and the photographer was Robert Doisneau, Izis or Willy Ronis she would have had a ‘French stick’ under her arm. In this photo there are maybe up to 80 families living in the flats, and there are just two parked cars, maybe three if you count the one at the bottom, which may be  passing what could be a removals lorry.

“This is Watney Street, facing south from near Commercial Road.  Blakesley Street popping in from left at Players advert on wall.  The flats in the distance are Tarling Street Estate”   – CM.

Photo update, September 27, 2018.  Kevin Clarke writes from Australia, re. the boy who is central in the above Watney Street photo:

“Hi, I am Kevin Clarke, writing from Mount Martha, Victoria, Australia. In the picture of Watney Street, identified by Christopher Matheson, I am the boy wearing the over-sized jeans, next to the couple with the pram. Those jeans were my first pair of long trousers. I was very taken with them — but did not like having to turn up the bottoms. I was aged 9 or maybe just turned 10 when this photo was taken. I lived at 145 Shadwell Gardens, top end of Watney Street, near Shadwell Station.”

– Many thanks for getting in touch Kevin, and amazing and heart-warming that after all these years you see yourself in Watney Street in the late summer of 1954.  – Pete Grafton.

Besides Kevin being in the above 1954 Watney Street photo note the small rugs, sisal mats, a roll of lino (linoleum) and clothes (second-hand?) for sale, and Players cigarettes.  Until Cyril Lord came along with his budget priced carpeting in the early 1960s, a carpet was a luxury item for many unskilled and semi-skilled working class people. 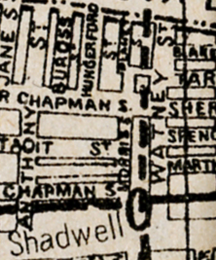 Watney Street is on the right, running vertically.  Map: 1929 edition of A1 Guide & Atlas to London and Suburbs, published by Geographia.

Watney Street, Shadwell, identified by Christopher Mathieson.  Reverse shot of previous photo of Watney Street.  The railway line the steam train is on is now part of the Docklands Light Railway.  A fruit and veg stall on the right.

Unlike some British cities, fruit and veg was a popular part of the diet of Londoners, of all classes. The fruit and veg stall, with the oranges and apples piled up pyramid style, continued to be a street feature in London working class areas well into the late 1970s, often outside the entrances to railway stations, such as Forest Gate in East London. Here and there, they are still around.  In late January, 2016,  Mike Quinn saw the London Town 54 taster post on petegrafton.com and got in touch:

“Just seen the photo of Witney Street market and the two people standing behind the stall look like my mum & dad. We lived in the pub at the bottom of Witney Street called the Old House at Home, their names were Rose & Bert Quinn, they had three daughters & one son, me.” “East End Beauty”, Hans-Richard Griebe’s  title.  Christopher comments “Well she isn’t my sister so I don’t know who she is. However, I do remember those Smiths Crisps bags.” 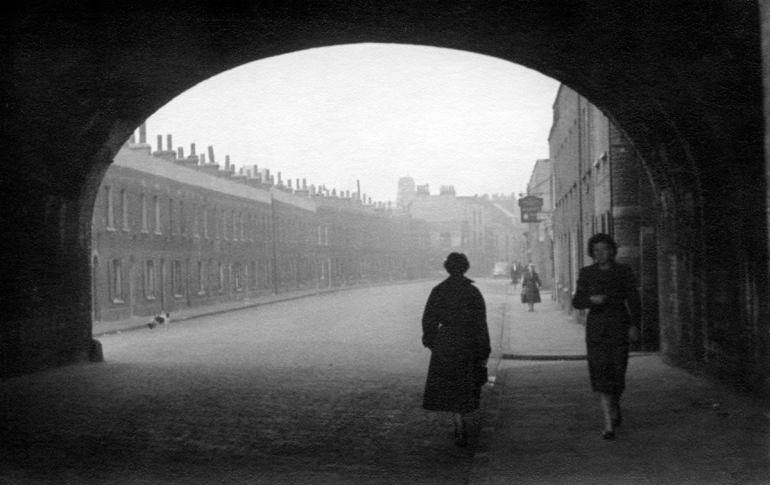 “Hardinge Street facing north from beneath the Fenchurch Street/Southend train line. Hardinge Street was very wide and this is one of the two arches which spanned it.”  – CM 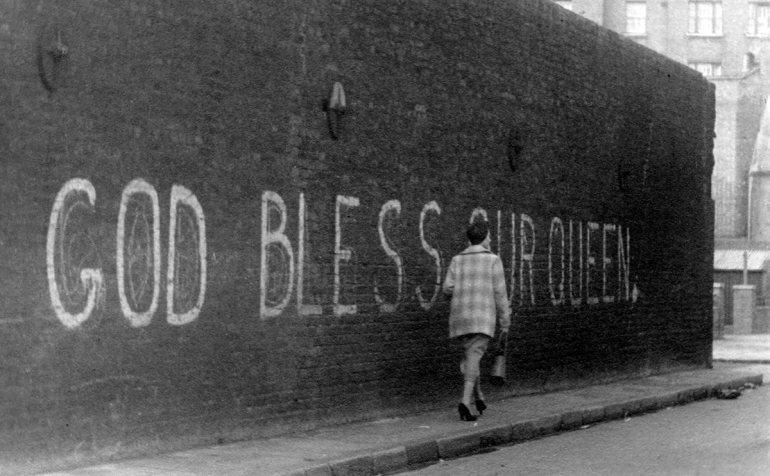 On the death of her father, George VI,  the young Princess Elizabeth had been crowned Queen Elizabeth II at Westminster the summer before.  The “ruins” will probably be the result of the Luftwaffe bombing blitz on London between September 1940 and May 1941.

Sunday by the Pond, Kensington Gardens 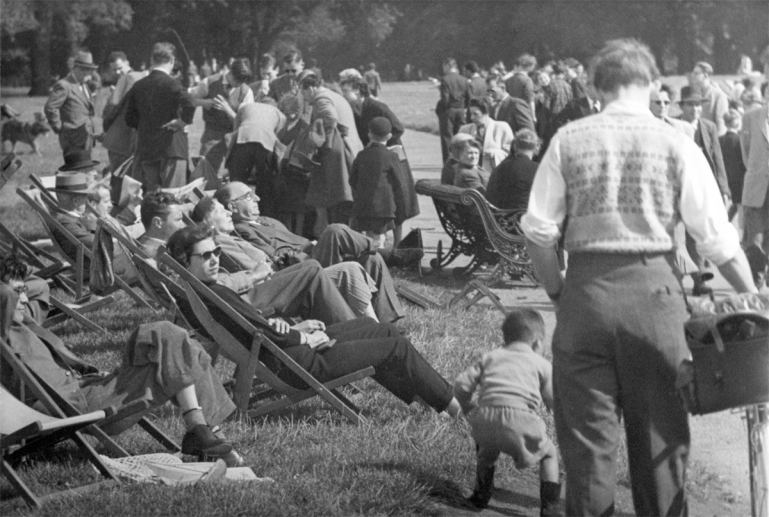 Crop from above photo.

Like the previous photo there is “pimpling” on part of the negative that produced the print.  On the above photo it is seen on the little boy’s coat.  It is possibly caused by Hans Richard speeding up the drying of his strip of negatives, using some too close heat source. For a discussion about this, and other technical aspects of his processing and printing, see ABOUT above.

With his stud collar, type of bowler hat and style of dark jacket the elderly gentleman, even in 1954, belongs to an earlier age.

Han’s Richards photos are here in the same sequence as in his Scrapbook, as are his photos in all the chapters of London Town ’54.   It is at the bottom of the two page spread that he identifies the home as in Teignmouth Road, Cricklewood, which is in north west London.

It is probable that two of the mothers are German speakers, perhaps all three.  Mrs Hulbert, below, may be German and has married an Englishman.  Two of the identified mothers have had their photo taken in a park, and further down in the sequence is an unidentified mother with children, presumed to be in the same park.  The interior photos are assumed to be 100 Teignmouth Road.  Deirdrie has had a change of dress during the taking of the photos, but it seems unlikely that Hans Richard would have visited this group of mothers and toddlers twice.  Amongst the nearest two green spaces to Teignmouth Road is Gladstone Park.

It is possible in the above photo that Deirdre is playing with a box of the luxury brand Abdulla cigarettes. 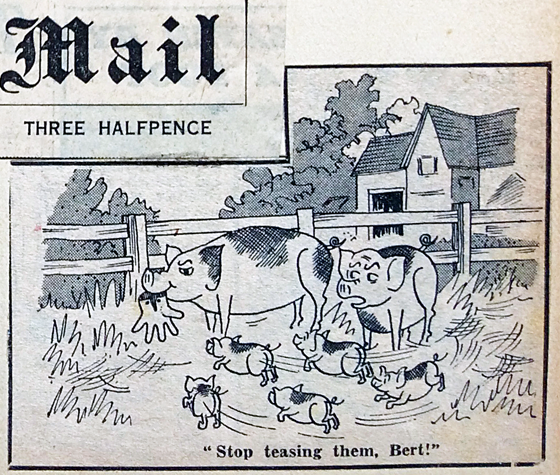 As usual, Hans Richard has a fine sense of humour.

Next:  12. The Thames from Richmond to Tower Bridge & A Trip on the Royal Sovereign. 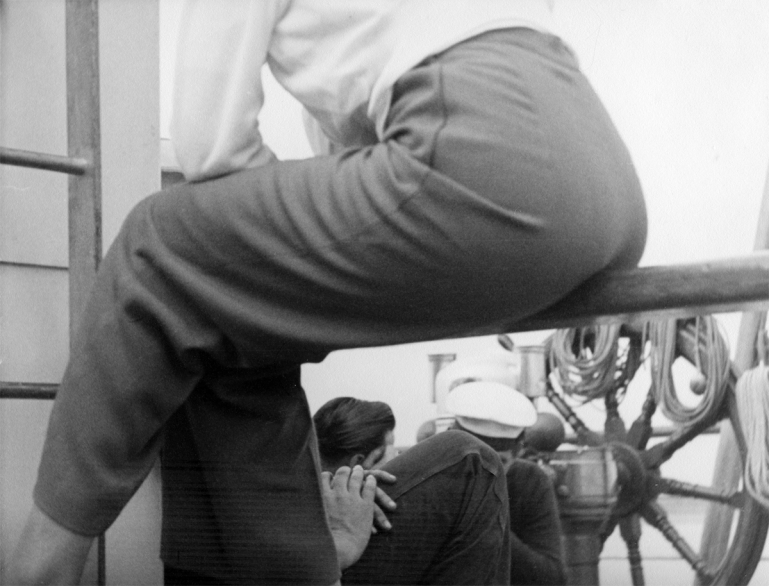