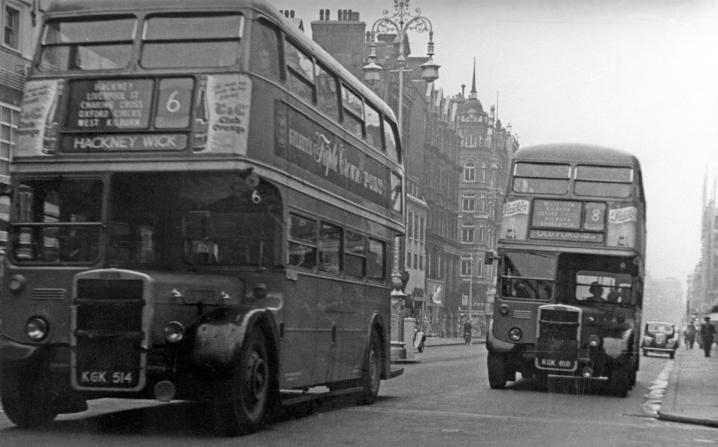 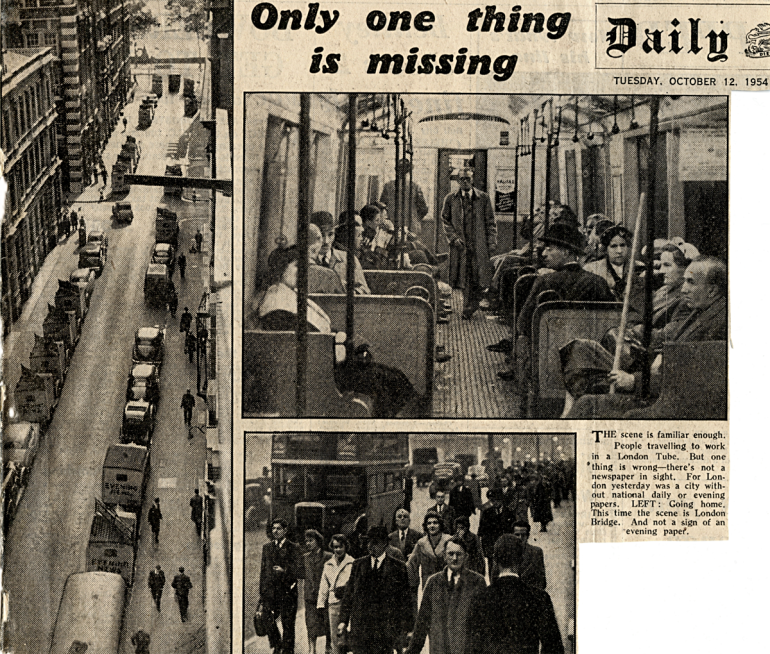 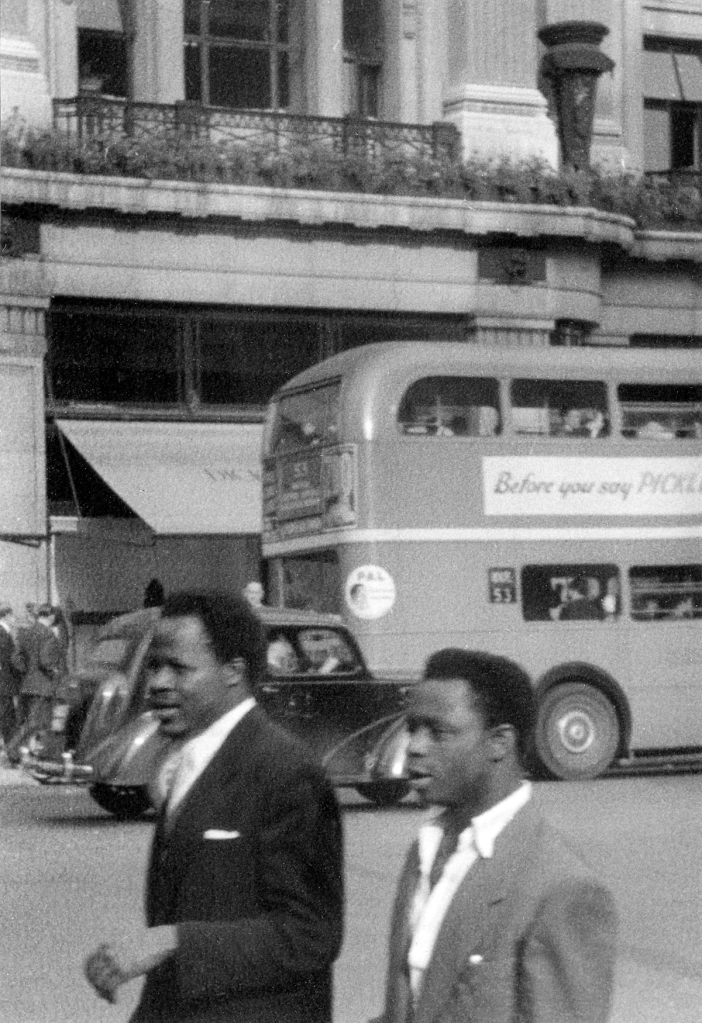 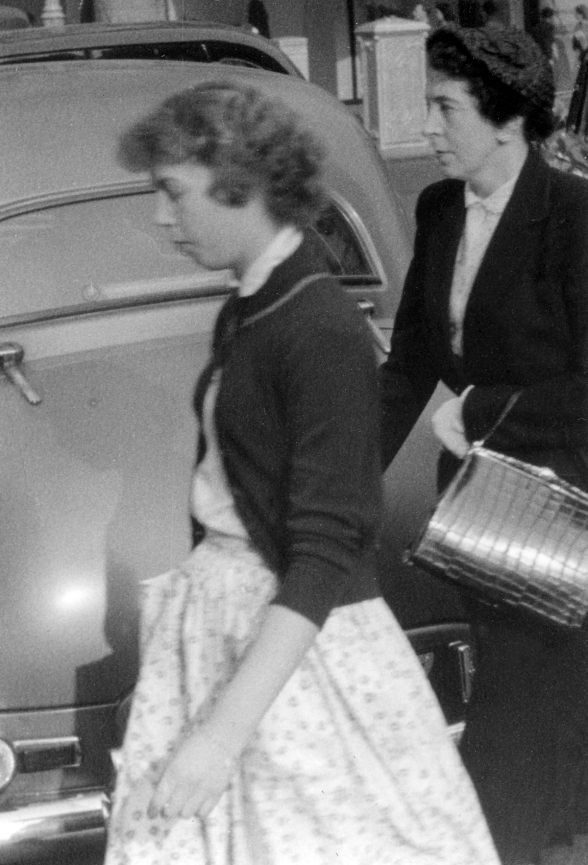 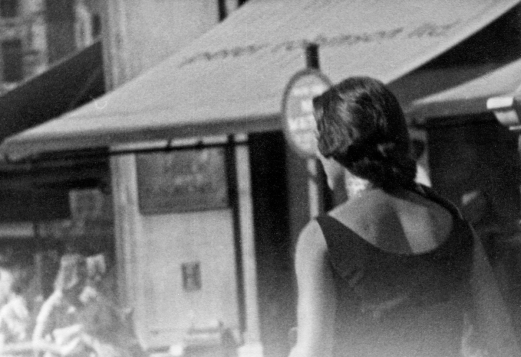 Although the dress is made of textured material, (see upper back), the faint whirlpool pattern on the mid to lower rear is caused by the photo negative being sandwiched between two small plates of glass in the photographic enlarger.  It is known as ‘Newton Rings’, and this pattern will occasionally be seen in other Hans Richard’s photos.

He has got this shot by standing on the lower, emerging steps, of the Tube station.

He has used the same technique, as above, here, and below, in a moment.

In this shot white walled tyres on the Ford Zodiac in background, and WPC’s in the foreground.  In a ‘taster’ for London Town ’54 I posted on my petegrafton.com website in September, 2013 I wrongly identified the car with the whitewall tyres an a Ford Consul.  Viewer Paul Gatty spotted that it was a Zodiac, and not a Consul, as I had described it. He got in touch.   Paul wrote “It is a Ford Zodiac, newly introduced, and top of the range. Very glitzy with the two tone paint as standard, as are the whitewalls.” 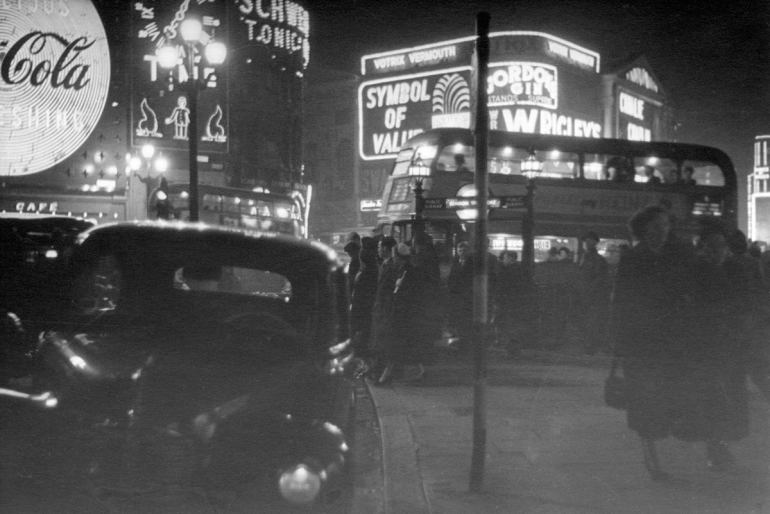 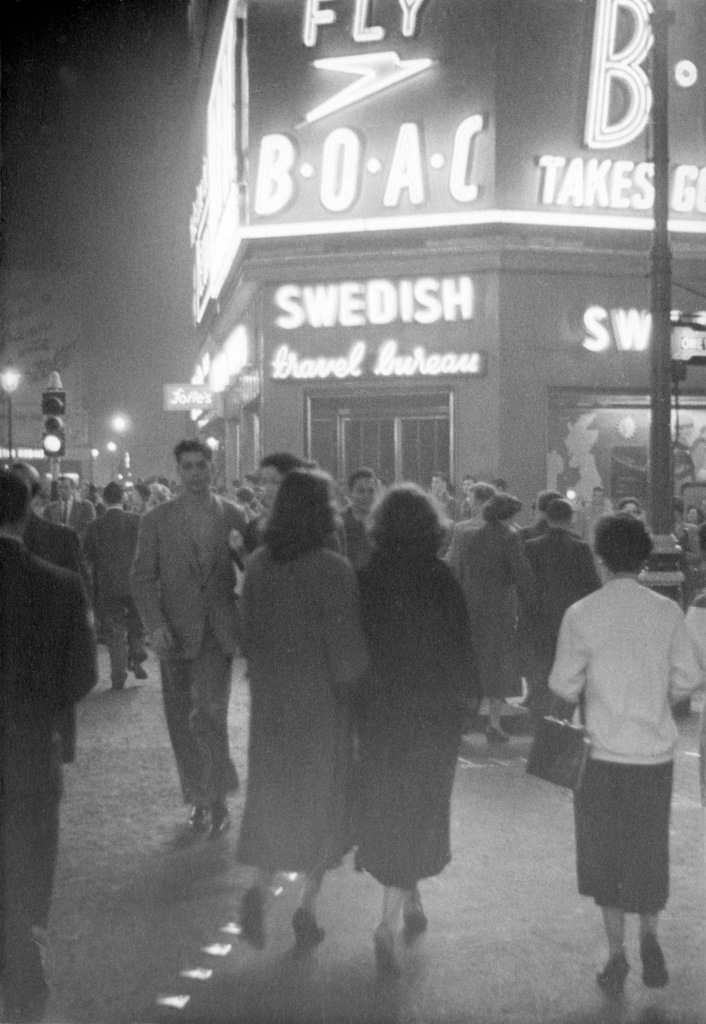 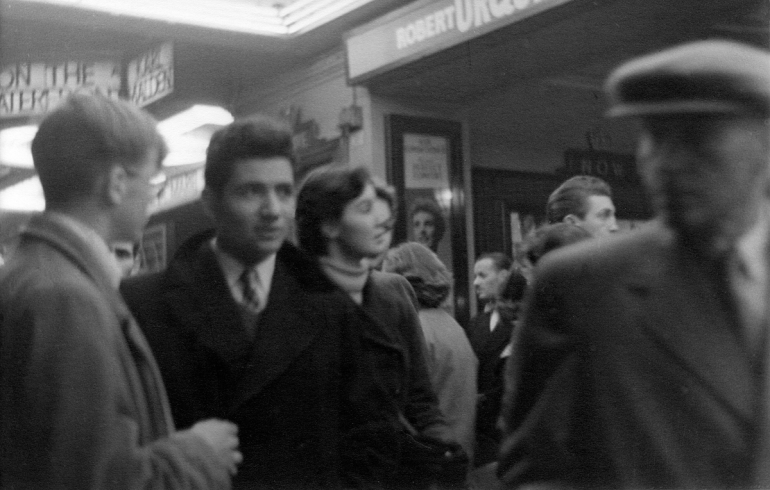 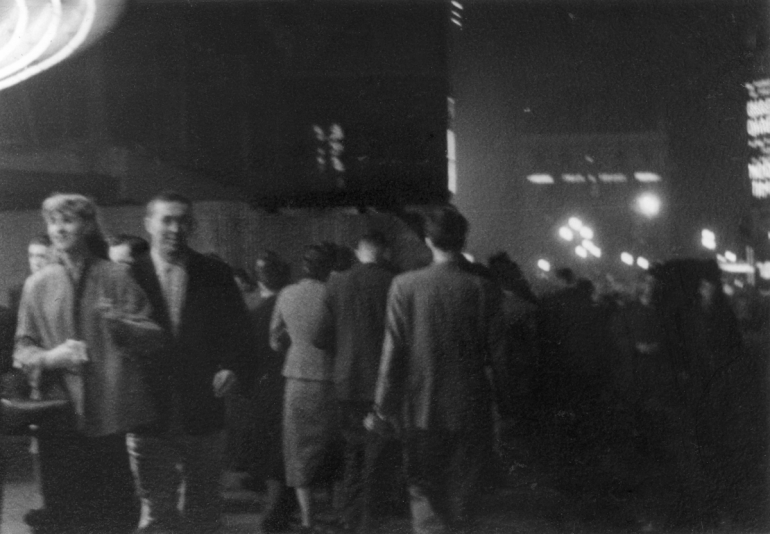 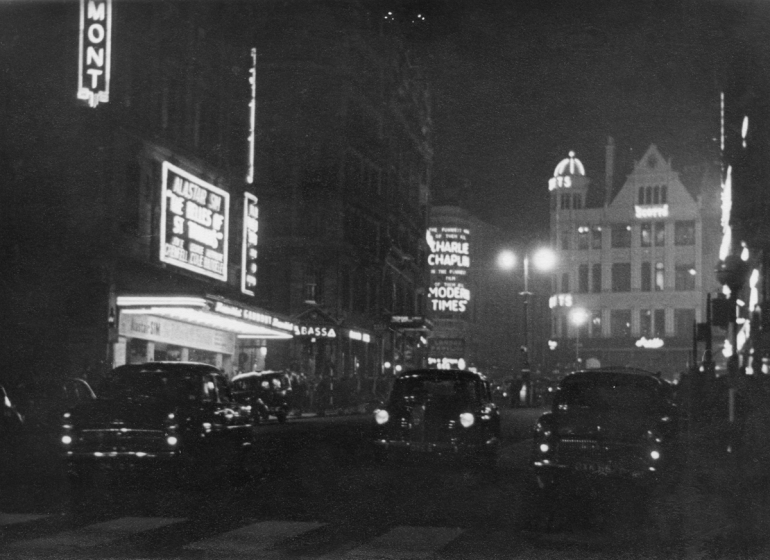 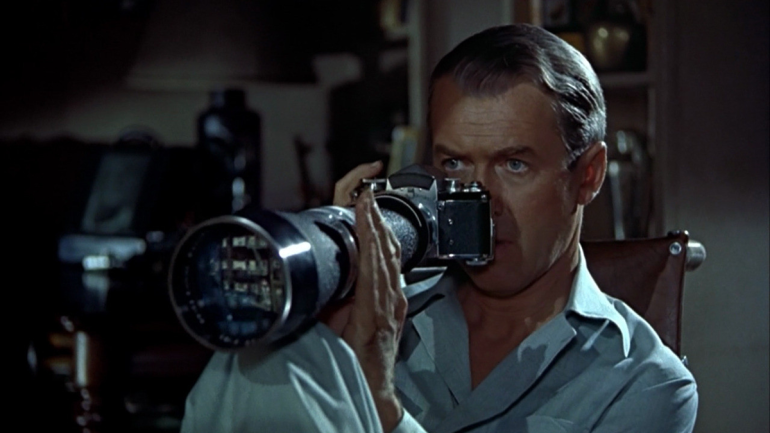 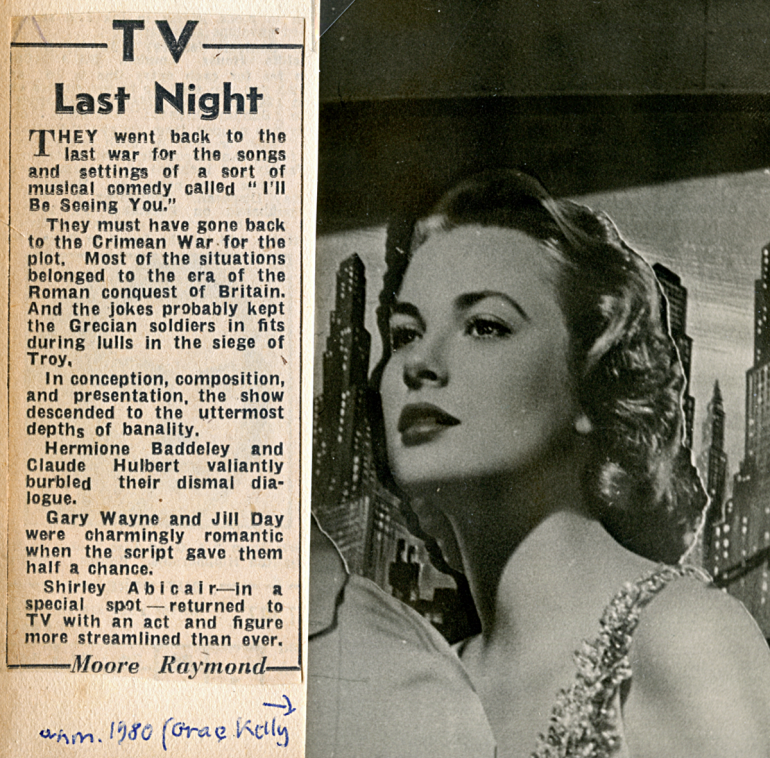 3 Coins in the Fountain and 3 Squaddies.  Squaddies – National Servicemen (conscipted civilians) turn up in several of Hans Richard’s photos.

In the same period, between August and October 1954 that Hans Richard was taking photos in Piccadilly at night a BBC camera crew and director were also at work, filming We Live By the River, which after editing was shown on BBC TV the following year, in 1955.  The Robert Urquart film, Chaplin’s Modern Times, and the Belles of St. Trinians occur in both Hans Richard’s photos and We Live By the River. 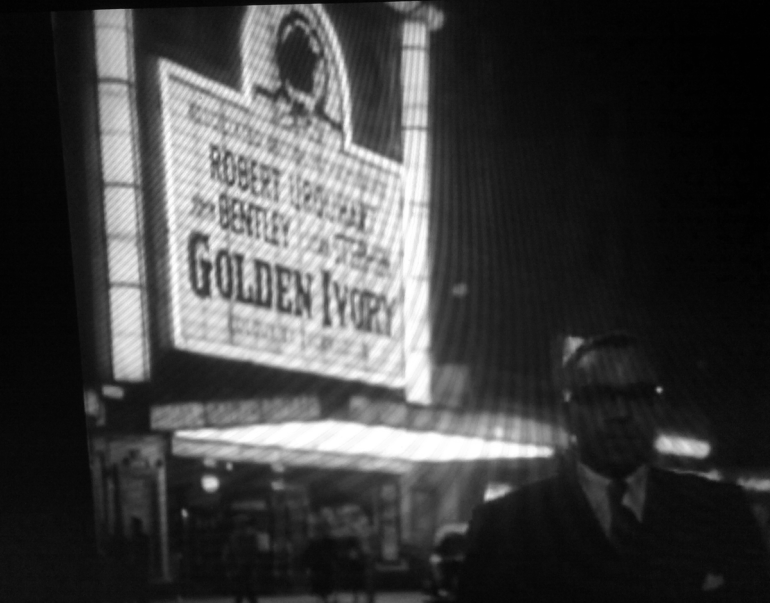 We Live by the River. Robert Urquart film.  Screen photo.

We Live by the River, Wrigleys and Modern Times.  Screen photo.

We Live by the River. The Belles of St Trinians.  Screen photo.

Camera crew and Hans Richard could have bumped into each other.  The BBC described the film as “An atmospheric journey across London which follows two boys…”  We Live by the River was photographed by Clifford Hornby and directed by Jack Howells. 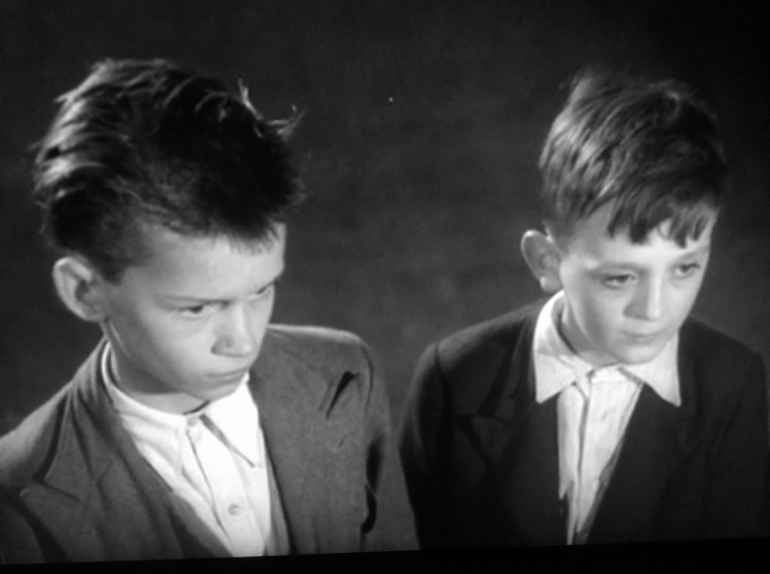 We Live by the River. The two boys,  who were from the south side of the Thames.   (Screen photo)

“Michael”.  A Hans Richard Griebe photo, August – October 1954.  Michael was another boy who lived by the Thames, the Shadwell side.  To see this photo of Michael in context, see Chapter 11 London Docks and East End.