Hans Richard has started his photospread of Hampton Court as “1. Tag” – First Day.  The photo of his temporary digs in Atney Road, Putney in Chapter 1 shows a rain sodden pavement.  He either took the photo on the Monday (the following day), or the weather has cleared up by the afternoon of the Sunday visit to Hampton Court.  He is taken to Hampton Court by Mrs Englemann, and two fellow English language students, a mother and daughter from Lübeck. “Mrs Engelmann”.  The Schröders are at the end of the bench.  Mrs Engelmann is centre, walking towards us. 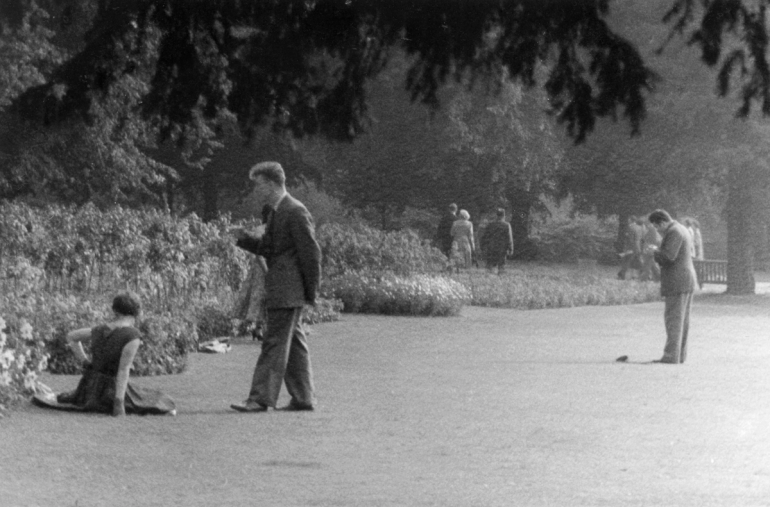 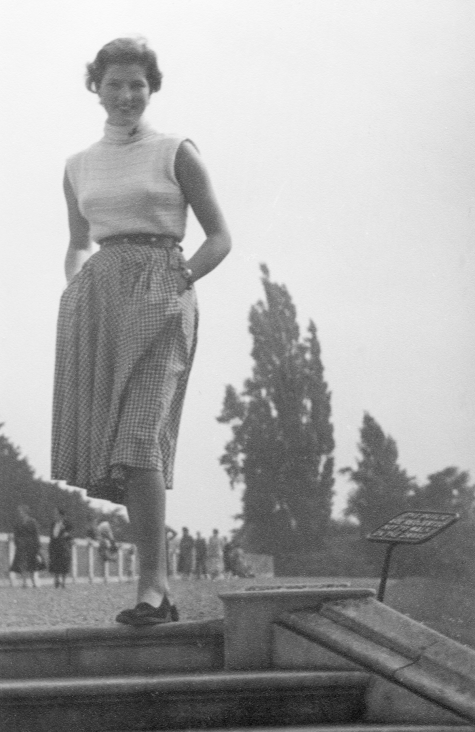 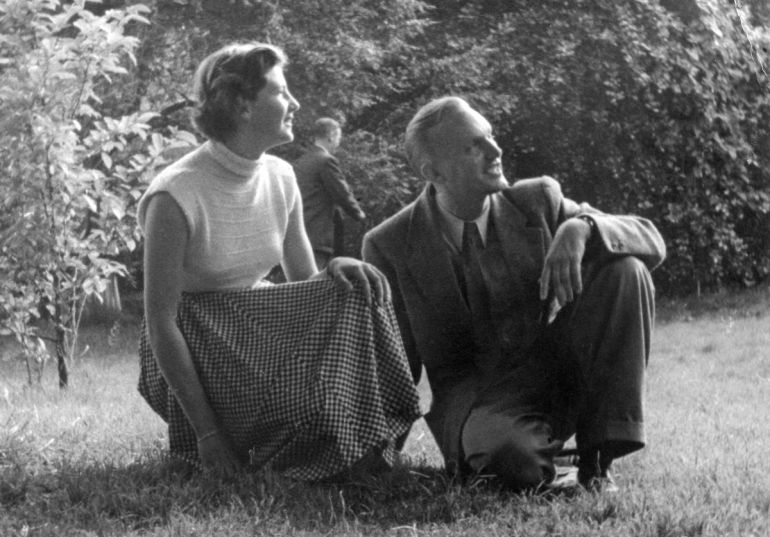 Often when Hans Richard is in the photo it is difficult to know whether someone else has taken the photo, or whether he has put his camera on a lightweight tripod and used a mechanical timer to trigger the shutter. He is always careful not to include distracting coats, camera cases, etc, in these type of photos.  For instance, in the shots of the Shröders and Mrs Engelmann above, when they have removed their coats, their coats are never seen in the shot. Besides radios, and a record player, TV sets are a feature in this Radio & TV shop display.  The Coronation of the year before had boosted TV set sales, and the passing of the Television Act, enabling Independent television to vie with the BBC, in 1954, was a further boost.  The idea of independent television – “commercial television” as it was called by its opponents – was fought against by the Labour Party, some Conservative MPs, and many prominent Church people, fearful of a “degrading” effect on viewers.  The first transmissions were in the London and outer London area in September, 1955, and as more transmitters were built, eventually rolled out across the country, reaching Central Scotland in 1957.  After the staid BBC diet of The Groves, Dixon of Dock Green and Bill & Ben the Flowerpot Men, the viewing public gleefully lapped up the chepaz on ITV of Dragnet, Highway Patrol, Gun Smoke, Popeye (for children), and the home grown favourites such as The Army Game, Sunday Night at the London Palladium and American inspired quiz shoes such as Double Your Money and Take Your Pick.  The soap Emergency Ward 10 joined the list of ITV favourites in 1957. 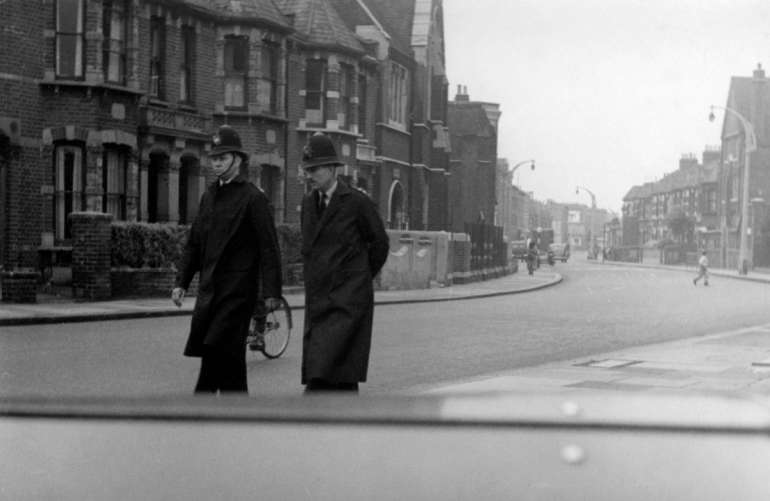 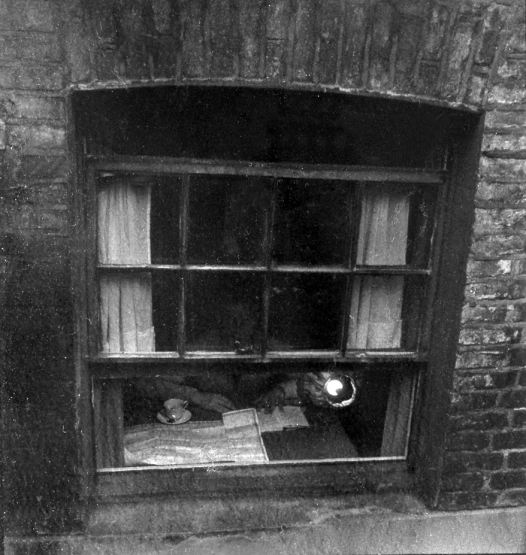 The “R” indicates the photo was taken with a Rollei – a Rolleiflex medium format camera. Hans Richard occasionally used a Rolleiflex, besides his Exakta.  The larger negative size of a Rolleiflex is 6 cm x 6 cm, perfect for making an enlargement from a small section of the negative.  From the enlargement (and adjusting the print exposure time) he printed from the above photo/negative we can see that he is looking at a London Transport bus map.

Miss Faubel.  The ’88’ in his caption above refers to her age, not the street number.  The ear trumpet indicates she is hard of hearing.

At some time in the 1980s Hans Richard added to his photo scrapbook, using a blue ball point pen, a map of the area he was staying in. 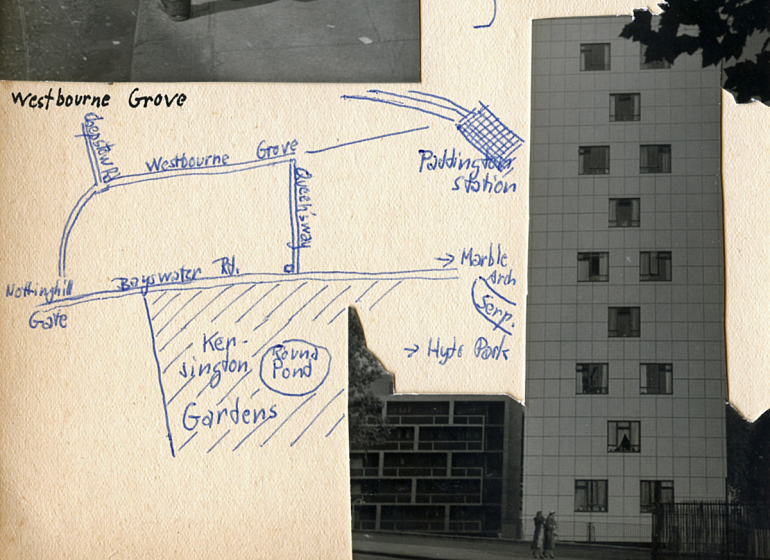 Chepstow Road is drawn towards the top left of his map.  Queensway is shown off Westbourne Grove. 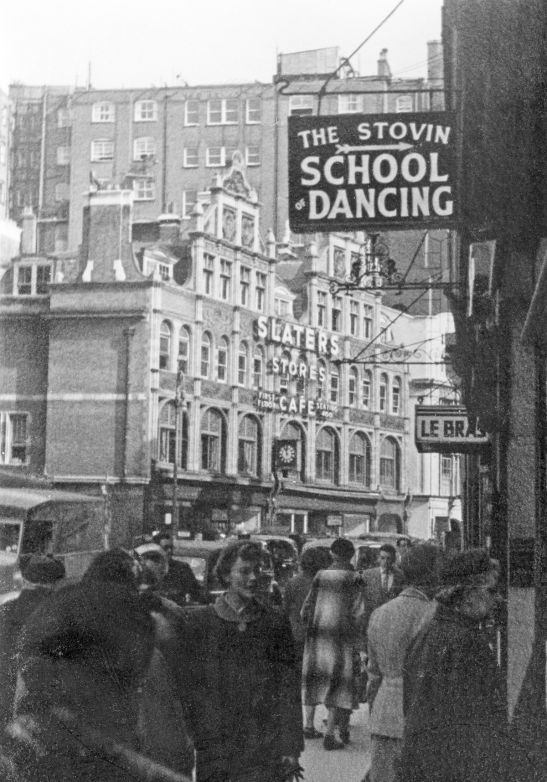 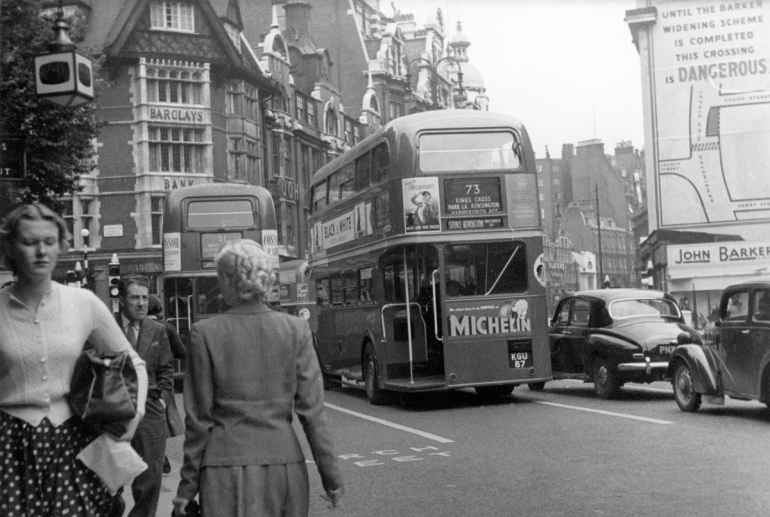 This is one of Hans Richard’s nearest bus stops to Chepstow Road, in Westbourne Grove.  The 27 bus could take him to Edgware Road and then to Regents Park, Baker Street and on to Camden and Chalk Farm.  At another nearby bus stop he could catch the No.23 bus which would go past Marble Arch (for Hyde Park) and then on to Oxford Circus, Piccadilly Circus, Trafalgar Square, Aldwych, Fleet Street and to St.Paul’s Cathedral and the City of London.  His nearest Tube stations included Royal Oak and Bayswater.