From Hans Richard’s captions in his Scrapbook we know that he first visited Portsmouth on 15 September (Battle of Britain Day), and then again on 12 October.

This is Waterloo Station, London.

This photo was taken by Herta.  Later in this section on Portsmouth, Hans Richard pastes in two photos of Herta, who accompanied him on the 12 October trip.

Besides postcards of naval boats, Han Richard took photographs of Royal Navy boats in Portsmouth.  But as can be seen on one of the reproduced pages below, the photos have been removed. There are six pages with photos of Royal Navy ships removed.  From his captions we know that HMS Vanguard, Vigo. Finisterre, Implacable, and others have been removed. As speculated on the removed photos from his Imperial War Museum section, the photos have either been sold separately by the ebay vendor of this Scrapbook, or at some point Hans Richard has transferred them to a Naval Boat themes scrapbook. 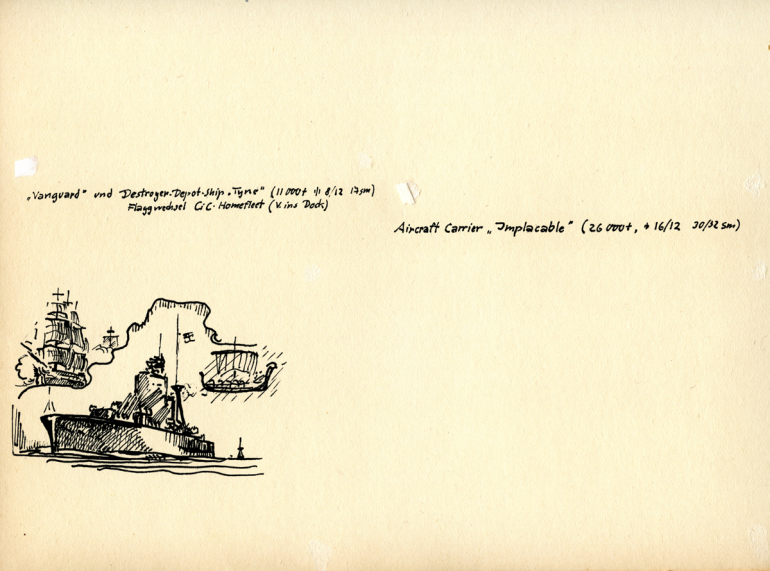 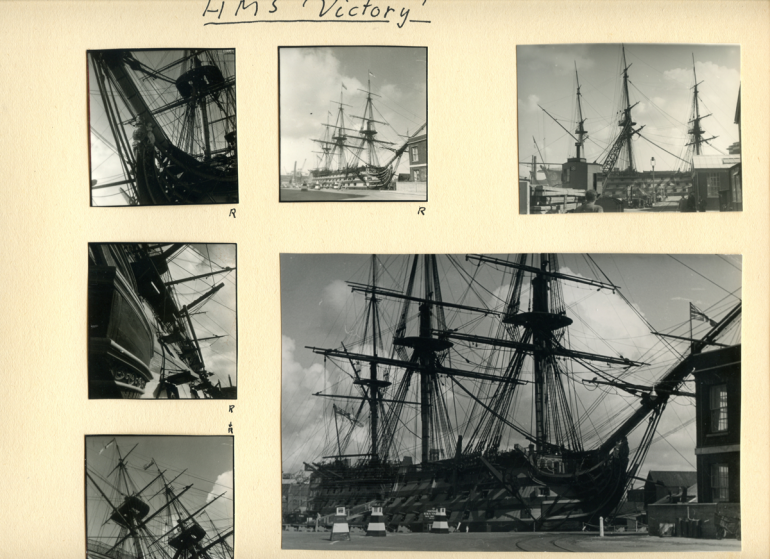 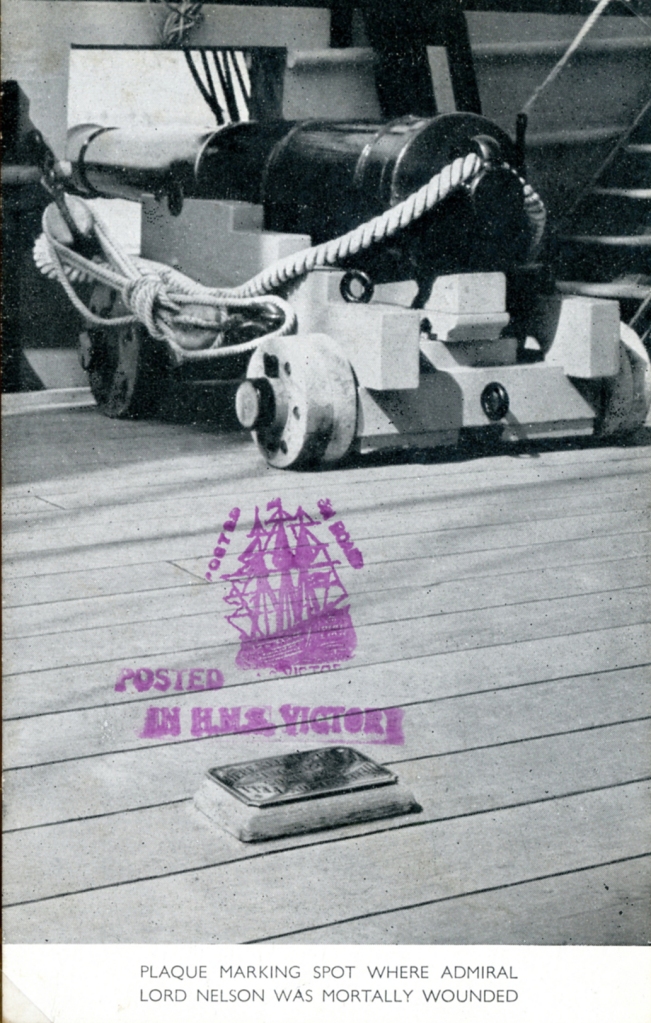 In between the visit to Portsmouth and then Southsea, Hans Richard has pasted in the following news item and cartoon from Giles, of the Daily Express, from 23 September, 1954. The reverse of the cutting is reproduced, as it is a news story on the soon to be broadcast ‘Commercial’ television in Britain. 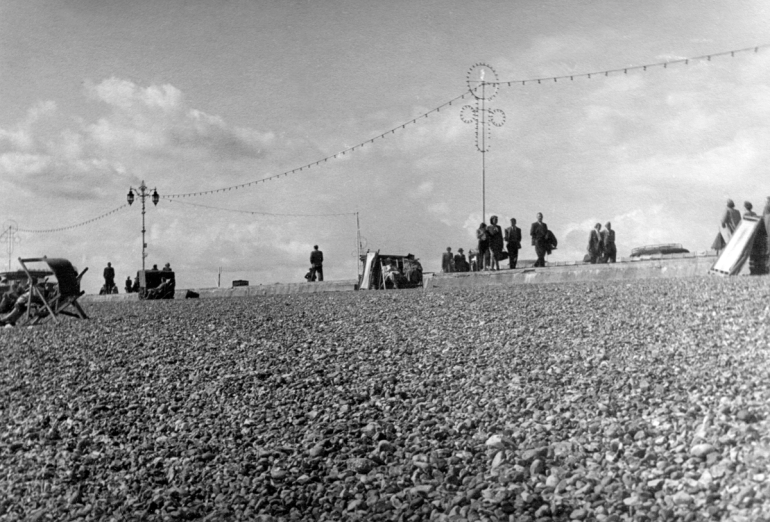 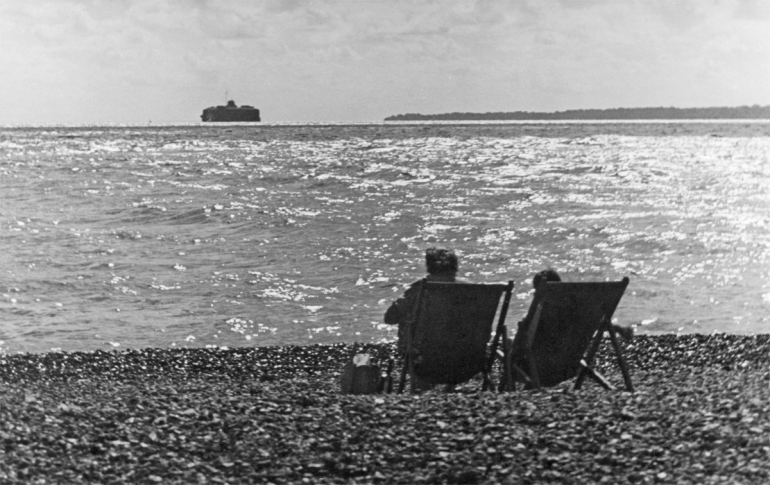 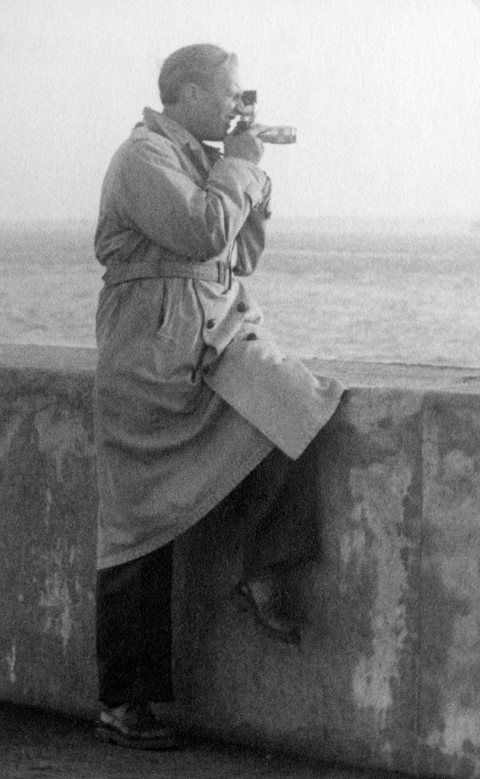 Wearing his raincoat suggests this photo was taken on his second visit on 12 October, ten days after Herta arrived in London.  Photo marked ‘R’ for Rolleiflex. Photo probably taken by Herta, and cropped to a rectangular shape when printed. Marked ‘R’ for Rolleiflex, and photo probably taken by Herta.

Hans Richard has pasted these two photos together.  The photo of him, holding his Exakta, is most likely taken by Herta, probably at his request. Pasted in at the end of the Portsmouth and Southsea sequence is panel from a carton of Ilford HP3 35mm black and white film.  There is no caption to indicate why.  The film, reformulated, is still available from the British company Ilford as Ilford FP4.  When Hans Richard set out for England from Kiel he would most likely have had rolls of the German Agfa black and white film.  It is assumed that at some point he ran out of Agfa, and bought Ilford film, although Kodak film would also have been available for him to buy in the U.K.